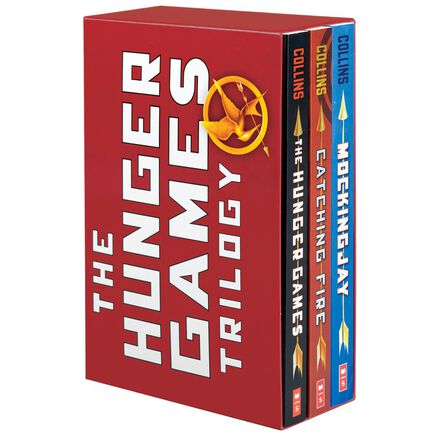 In the ruins of North America, the Capitol rules its 12 districts with the annual Hunger Games: a fight to the death on live TV.

Recommended for Grades 6 & up.

The Hunger Games:
In the ruins of a place once known as North America lies the nation of Panem, a shining Capitol surrounded by twelve outlying districts. The Capitol is harsh and cruel and keeps the other districts in line by forcing them to participate in the annual Hunger Games, a fight-to-the-death on live TV. One boy and one girl between the ages of twelve and sixteen are selected by lottery to play. The winner brings riches and favour to his or her district. But that is nothing compared to what the Capitol wins: one more year of fearful compliance with its rule. Sixteen-year-old Katniss Everdeen, who lives alone with her mother and younger sister, regards it as a death sentence when she is forced to represent her impoverished district in the Games. But Katniss has been close to dead before... and survival, for her, is second nature. Without really meaning to, she becomes a contender. But if she is to win, she will have to start making choices that weigh survival against humanity and life against love.

Catching Fire:
Against all odds, Katniss Everdeen has won the annual Hunger Games with fellow district tribute Peeta Mellark. But it was a victory won by defiance of the Capitol and their harsh rules. Katniss and Peeta should be happy. After all, they have just won for themselves and their families a life of safety and plenty. But there are rumors of rebellion among the subjects, and Katniss and Peeta, to their horror, are the faces of that rebellion. The Capitol is angry. The Capitol wants revenge.

Mockingjay:
Katniss Everdeen, girl on fire, has survived, even though her home has been destroyed. There are rebels. There are new leaders. A revolution is unfolding. District 13 has come out of the shadows and is plotting to overthrow the Capitol. Though she's long been a part of the revolution, Katniss hasn't known it. Now it seems that everyone has had a hand in the carefully laid plans but her. The success of the rebellion hinges on Katniss' willingness to be a pawn, to accept responsibility for countless lives, and to change the course of the future of Panem. To do this, she must put aside her feelings of anger and distrust. She must become the rebels' Mockingjay... no matter what the cost.