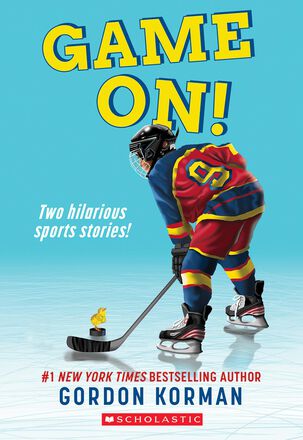 What do a scientist, a screenwriter, and a hockey team all have in common? A chicken!

Milo has a problem. He's trying to do a project on the food chain, so he charts the growth of a baby chick and makes arrangements to serve his specimen to the judges at the science fair. But he's baffled by the rest of his class. They name the chick Henrietta. They sign up to take her home on weekends. They claim that she's a good-luck charm, a friend, even the new hockey team mascot! Milo just wants to win the science fair to impress his dad. But when the class finds out that Henrietta will be cooked and eaten for Milo's project, everyone panics!

They'll have to work together in ways they've never imagined in order to hatch a plot to save the championship game, the science fair - and Henrietta!

The Feather Soft Tigers never imagined Little League could be so humiliating. Life is tough when your team sponsor is a bathroom tissue manufacturing company. Worse, the Tigers are awful! With a catcher who's afraid of the ball, a right fielder who falls asleep during games, and a coach who knows zero about baseball, it looks like the Tigers are going straight down the toilet.

Enter Kristy Pendergast, the coach's obnoxious granddaughter and a gigantic pain in the neck. But when Kristy takes over as coach, her crazy schemes pull the Tigers out of their slump and send them on the ultimate Cinderella-story winning streak.