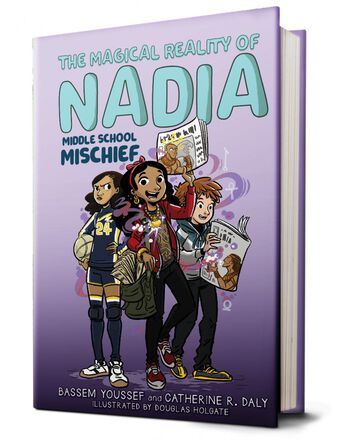 Inspired by the author's real-life experiences, this second hilarious and sweet novel about sixth grade Egyptian immigrant Nadia, has her battling school newspaper drama, controversy with the school mascot, and some magical mischief, too.

Nadia's school is choosing a new mascot and her idea is totally going to win! And she's going to be amazing at writing for the school newspaper this term.

But a couple of weeks in, the newspaper is a big mess. The mascot contest is mayhem, too. (Who knew choosing a costumed character could cause such controversy?!) Then Nadia and Titi discover that the hippo amulet holds a second secret, one that's super powerful-and super scary. Too bad they have no idea how to stop it.

But Nadia is on the case! If she can solve the mystery of an ancient amulet, winning the mascot contest and acing her reporter assignments should be easy...right?

From comedian Bassem Youssef and author Catherine R. Daly comes a humorous and heartfelt story about integrity, empathy, and the power of friendship. Includes sections of black-and-white comics as well as black-and-white illustrations throughout, brought to life by Last Kids on Earth illustrator, Douglas Holgate.