May flyers and new products are live! Sign in to your account to enter a Class Code. 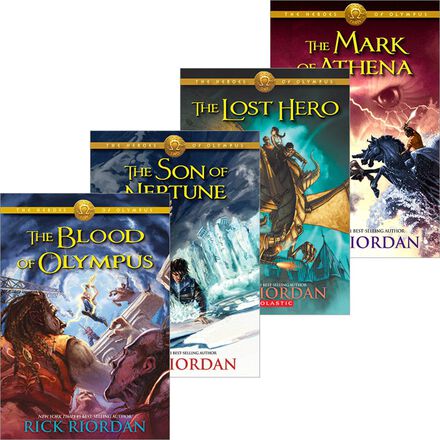 Percy Jackson returns to the land of Camp Half-Blood and meets a whole new generation of demigods!

This bestselling series is a great way to introduce middle grade readers to Greek and Roman mythology!

A prophecy has decreed that seven demigods—half mortal, half god—will defend the world from the earth goddess Gaia, who is out for revenge against the Olympian gods. But there's a catch: some of the demigods are Greek and some are Roman—and these two groups are longtime enemies. They'll have to unite to put a stop to Gaia and her army of giants and monsters!

Bringing the teen heroes of Percy Jackson & the Olympians together with a whole new cast of characters, author Rick Riordan has created an outstandingly fun adventure deeply rooted in mythology that will satisfy both longtime fans and new readers. Combining nonstop action with the unmatched drama of the gods, the books will have readers racing to turn the pages—and seeking out the original stories.