DON’T WAIT — ORDER TODAY! We have titles in stock and ready to ship! Due to increased holiday demand and extreme weather events, unfortunately we cannot guarantee delivery times.

The Ice Chips and the Magical Rink 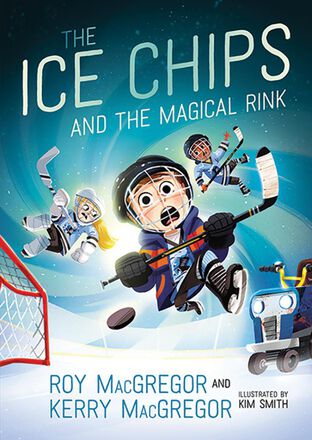 Can a little time travel magic help Lucas and his friends save their neighbourhood hockey arena?

Lucas Finnigan eats, sleeps and breathes hockey. With his friends Edge, Swift and Crunch, Lucas plays on his hometown's rink, dreaming of the day when he knows he'll make the NHL. But lately money has been tight at home, and, after a major growth spurt, Lucas is forced to wear hand-me-down gear that doesn't quite fit right. Now he's not sure he'll ever make it to the Hall of Fame like his hockey heroes.

And that's not the only problem. With the community arena's chiller on the fritz, and replacement parts too tough to come by, it looks like Lucas and his friends may be doomed to a season on a plastic rink―or worse, no hockey at all!

But with a magical discovery, and some help from one of hockey's greatest players (who was a kid once, too!), their final skate might turn into their first great adventure...

About the Author/Illustrator
Roy MacGregor is an author, columnist and feature writer for The Globe and Mail. He is also the author of nearly 40 books, including the The Ice Chips series, co-authored with his daughter, Kerry MacGregor, who has worked in news and current affairs at the CBC, and as a journalist with The Toronto Star. Kim Smith is the New York Times bestselling illustrator of over 30 picture books. In addition to illustrating picture books, Kim has also worked on children's games, puzzles, animation, 3D displays, posters, and magazines. When she's not busy illustrating, Kim spends most of her time exploring and painting in the great outdoors. She lives in Calgary, Alberta, Canada.