NEW! Anne Frank: The Diary of a Young Girl 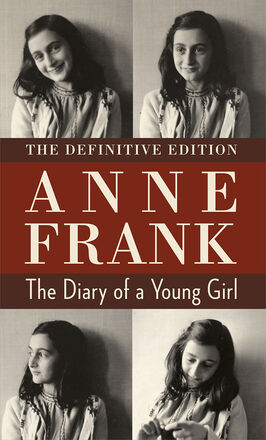 Discovered in the attic in which she spent the last years of her life, Anne Frank's remarkable diary has since become a world classic - a powerful reminder of the horrors of war and an eloquent testament to the human spirit. Restored in this Definitive Edition are diary entries that were omitted from the original edition. These passages, which constitute 30 percent more material, reinforce the fact that Anne was first and foremost a teenage girl, not a remote and flawless symbol. She fretted about and tried to cope with her own sexuality. Like many young girls, she often found herself in disagreements with her mother. And like any teenager, she veered between the carefree nature of a child and the full-fledged sorrow of an adult. Anne emerges more human, more vulnerable and more vital than ever.
Show full description
In 1942, with Nazis occupying Holland, a thirteen-year-old Jewish girl and her family fled their home in Amsterdam and went into hiding. For the next two years, until their whereabouts were betrayed to the Gestapo, they and another family lived cloistered in the "Secret Annex" of an old office building. Cut off from the outside world, they faced hunger, boredom, the constant cruelties of living in confined quarters, and the ever-present threat of discovery and death. In her diary, Anne Frank recorded vivid impressions of her experiences during this period. By turns thoughtful, moving, and amusing, her account offers a fascinating commentary on human courage and frailty and a compelling self-portrait of a sensitive and spirited young woman whose promise was tragically cut short.
Themes: History , Jewish Experiences , Reading and Literacy , World War II and the Holocaust
Subject: Language Arts, Social Studies
Supplies: Books , Classroom Essentials , Teacher Rewards
Category: Reading, History
Editors' Picks
Recently Viewed & More